Mirror Mirror on the wall !!

a surface, typically of glass coated with a metal amalgam, which reflects a clear image.

Mirror, mirror, on the wall, who invented you?

The silvered-glass mirrors found throughout the world today first got their start in Germany almost 200 years ago. In 1835, German chemist Justus von Liebig developed a process for applying a thin layer of metallic silver to one side of a pane of clear glass.

On the authority of Abu Hurayrah, may Allaah be pleased with him, said: The Messenger of Allaah, may peace and blessings be upon him, said:

“The believer is the mirror of the believer.”[Abu Daawud 4918 with a good chain]

Sheikh Saalih al-Fouzaan, may Allaah preserve him, explains this hadeeth by saying:

“A mirror is that which you see yourself when you stand in front of it whether the picture is presentable or needs fixing and modificaton. When a person wishes to leave from his home, he stands in front of the mirror because there may be something that he needs to correct on himself or remove from his clothing or the like. For a person to have a pleasant appearance in front of the people is a good thing, however there is the figurative meaning of mirror that shows you your deficiencies and that is your Muslim brother/sister.

The believer is the mirror of his fellow brother. Your brother knows the mistakes and shortcomings that you may have and therefore informs you of them so accept what he tells you. This is an encouragement to accept what your brother presents to you which entails the beautification of your inward and outward appearance.

Also he sees things in you that you can’t see yourself. A person may think he is complete and is mistake-free whereas his sincere and genuine Muslim brother sees that he has mistakes and shortcomings thus he instructs him to rectify them. So do not restrict yourself solely to your own assumptions and considerations but consult your brother and listen to the advice he has to give.

The first mirrors used by people were most likely to be a pool of water where they could observe their reflection and consider it magic.

it is believed that glass mirrors were invented at Sidon in the first century AD.

”The room in which there is no mirror, is worse than a prison-cell for a woman”.

…Of course, the same can be said about many, many men, who spend hours in front of the mirror for the sole purpose of beautification.

The earliest made mirrors were hand mirrors; mirrors large enough to reflect the whole body appeared in the 1st century AD. Celts adopted hand mirrors from the Romans and by the end of the Middle Ages had become quite common throughout Europe

When looking in the mirror

"O Allah, just as You have made my external features beautiful, make my character beautiful as well".

Ali ibn Abi Taalib (r.a.) reported that when the Prophet (saws) looked into a mirror he (saws) would say, "Praise and thanks be to Allah. O Allah, make me good mannered as You made me good looking." Anas ibn Malik (r.a.) reported that whenever the Prophet (saws) looked at his face in the mirror, he (saws) would say, "Praise be to Allah Who fashioned my nature and gave it a perfect form, and Who honored my face and made it good, and made me one of the Muslims." 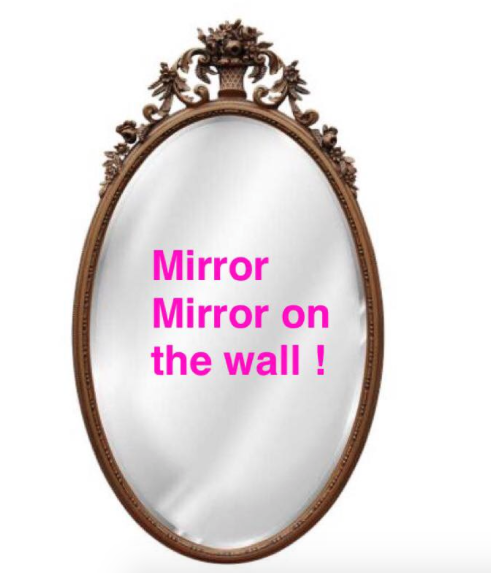