There is  two famous ayaats  we all know:

Contents of the Surah

In The Name of Allah, The Beneficent, The Merciful

It is commonly said that this Surah was revealed soon after Surah Duha and its contents confirm this since, again in this Surah some of the Divine Bounties are counted for the holy Prophet (S).

The theme in this Surah, mainly pivots on three different subjects:

The first is the expression of these triple Bounties; the second is the good news for the Prophet (S) informing him that his burden and difficulties of his prophetic mission will be removed soon; and the third is that attention should be paid to Allah, alone, and be hopeful and encouraged in worship and supplication to Him.

As it was mentioned before, according to the traditions of Ahlul-Bait (as) these two Suras are considered as one and then, in recitation of prayers, both of them are recited to form one complete Surah.

A careful examination of the contents of these two Suras leaves no doubt that they are quite closely related to each other. Again, a similar case is found for Surah Fil and Surah Quraish which will be dealt with later.

The above statements make it clear that this Surah (Inshirah) has been revealed in Mecca, but with regard to the verse:

"And We exalted for you your reputation",

some believe that it has been revealed in Medina when the name of the Prophet (S) and Islam had been known everywhere. But, this statement is not enough to prove their idea, because the Prophet (S), with all the problems that he had in Mecca, was completely known and his rise and invitation to Islam were talked about everywhere and in most gatherings, and also his reputation was spread in all parts of Arabia, especially in Medina, by the annual gathering of Hajj pilgrims.

The Virtue in Studying Surah Inshirah:

On the virtue of studying this Surah, the holy Prophet is reported to have said:

"He who recites this Surah will be rewarded the same as the one who met Muhammad unhappy and brought the grief out from his heart.”1

In The Name of Allah, The Beneficent, The Merciful

1. “Have We not expanded for you your breast?”2. “And We removed from you your burden,"3. “Which weighed down your back?"4. “And We exalted for you your reputation?”5. “Then, surely with hardship comes ease:"6. “Surely, with hardship comes ease,"7. “So when you have finished (with your immediate task), still strive hard, (then toil),"8. “And to your Lord turn (all) your attention.”

We Endowed You With Various Bounties!

The verses are stated in a loving and affectionate tone which shows the extreme grace of Allah to the holy Prophet (S).

In the first verse, pointing to the greatest bounty of Allah, it says:

"Have We not expanded for you your breast?”

The term /nasrah/ is based on /sarh/ which, according to Raqib cited from his book, Mufradat, means 'to stretch pieces of flesh and produce the thinner layers'. Then, he adds that the objective point of 'expansion of the breast' is its expansion with the Divine Light and His bestowed stillness and tranquility.

Further, he says that 'explaining the difficulties of speech' means its expansion and to explain its hidden meanings. In any case, undoubtedly, the objective point of 'expansion of the breast' is its metaphorical meaning, here which refers to the expansion of thought and the holy spirit of the Prophet (S).

A question arises, here as to whether this Surah was revealed in Mecca or not, however, the spread of Islam, the removal of the difficulties of prophethood, the conversion of the prophet's galling burden into joy and triumph, and the expansion of his reputation, all over the world, happened in Medina.

In the next verse, Allah gives His Messenger the most important glad tidings of hope:

“Then, surely with hardship comes ease".

Again, it emphasizes that:

O, Prophet! Do not grieve for the difficulties and troubles. They will convert to ease and comfort. The impediments of the enemies do not last too long, and the financial deprivation and economical difficulties of Muslims will not continue with the same form of poverty for ever.

He who suffers the hardships and stands against the storms of miseries with patience will surely taste the sweetness of its fruit. It will he the day when the voice of the enemies faints, their impediments remain in vain, the ways of success and progress are paved, and following the path, the path of Allah, is easy.

Although some of the commentators have rendered these verses into the general financial poverty of Muslims at the beginning of Islam, the broadness of the meaning of the verses envelops all the difficulties. These two verses are stated in a style which shows that they are not allotted only to the holy Prophet (S) himself or his time.

The rule is general and for all. They encourage the pure Muslim believers to know and be sure that whatever difficulties or troubles are encountered by men, Allah always provides a solution a way out, a relief, a way to lead to ease and happiness. Moreover, the solution or relief does not merely come AFTER the 'difficulty': it is provided WITH it.

It is the glad tidings or promise of Allah that enlightens the heart, makes it hopeful for triumph, and clears Man’s soul of the dirt of its hopelessness.

The holy Prophet (S) is reported to have said:

There is a tradition from Hazrat Ali (as) which says that a woman complained about her husband to Hazrat Ali (as) that he did not provide anything for her but, it was in the case that he was, indeed, poor.

Hazrat Ali (as) withheld imprisoning him, and advising her to patience, replied to her:

Finally, in the last verses of this Surah, it says:

"So when you have finished (with your immediate task), still strive hard, (then toil)”.

Never be idle or lazy at all. Do not put striving and effort aside. Always be busy and when you finish one task, begin another.

"And to your Lord turn (all) your attention.”

In any condition, seek His contentedness and try to approach His nearness.

As it was stated in the aforementioned text, there are many traditions (cited by different groups of Muslim scholars) narrated on the meaning of this verse:

"So when you have finished (with your immediate task), still strive hard, (then toil)”,

which say that the purpose of the verse is (as the statement of one justification) the appointment of Amir-al-Mo'mineen Ali (as) to the caliphate (leadership) after the fulfillment of the mission of prophethood. Still, some, suggesting various misleading ideas, show some prejudice on the opposite way.

It is found that the two ayyats appear twice as discussed earlier.

These  statements appear twice after each other. I heard scholars say that with every hardship/difficulty comes not one, but two eases.

ر is معرفة (definite) which implies it is the same difficulty. The word يسر is نكرة (indefinite) because of the تنوين and the lack of ال. It therefore implies two different eases. An ease and then another ease. Also, التنوين مفيد العظمة which tells us that with every difficulty there is tremendous ease. The other benefit of the تكرار here is counsel. Sometimes we look at language in a way that is too technical and forget that its actually a dialogue or conversation, in this case between Allah and His messenger. Have you ever heard someone console a friend whose in the waiting room of the hospital because a loved one is in the ER? They’ll say something like, it’ll be ok, it’ll be ok. This repetition is a display of love, affection, concern and support Allah shows His beloved صلى الله عليه وسلم.

This is the linguistic miracle of the Qur’an.

We will constantly face hardship in this life, there will only be moments of ease. Be patient and remember Allah's promise. 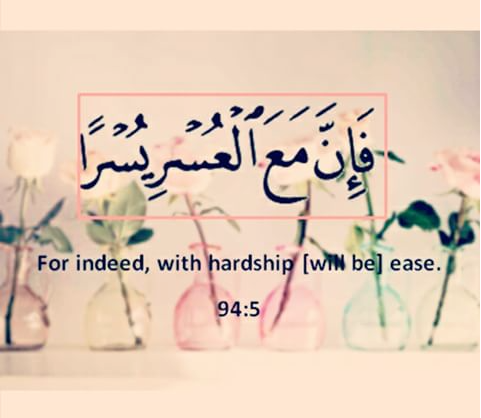 The Virtue of Surah Al-Kahf
Remembrance. أذكار .
THE UNSEEN.الْغَيْبِ.
Comment on this post
F
Fonts Pink
08/01/2020 17:15
Thank you for this interpretation.
Reply
M
Maya kareem
07/21/2020 09:08
My aim is to bring close two loving hearts<br /> It happens often that people can't meet each other living on different continents and speaking different languages. I still believe though that love knows no borders and speaks only one language of feelings. The more people find each other, the greater will be my faith in it My aim is to bring close two loving hearts that share same dreams thinking in different languages. <br /> <br /> Please Sport me for benifit other<br /> https://www.reallrishta.com/
Reply
Newsletter
Follow me
Search
THE CRAFT OF WISDOM