Maktub:) It is written!! مَكْتُوب

Maktub is an arabic word which literally means it is written.

It means fate or destiny.

The idea of the Maktub is beautiful, but it is dangerous for you to assume you already know what is written up there! I mean when God first created the Pen he ordered it to write:

Don’t forget this third dimension of the “Maktub”!

From mystical point of view, it points to the fact that whatever happens is already known to the One.

It signifies that Destiny exists.

It points finger to the fact that everything is already known to God.

“From a mystical point of view, it [Maktub] points to the fact that whatever happens is already known to the One.

Maktub indicates that He has written all and people should not fear because everything happens for a reason and we are all in His hands.

God understands what is to come in our lives because He did write our destinies.

Maktub means “It is written” in Arabic. The concept of maktub and determinism are greatly incorporated in Islam.

“Determinism is the philosophical view that, given certain initial conditions, everything that ensues is bound to happen as it does and in no other possible way; thus,nothing in nature is contingent, nor is there any room for human freedom”

This statement shows how fate is the major determinant of one’s destiny and that no outer force can disrupt it.

Even one’s self does not obtain the ability to change their own destiny.

Maktub, thus, is a key principle to those who are Islamic.

The religion of Islam also believes that major events are fated and decreed by God: many [followers] are thus optimistic of their future and destiny which God has already planned out. 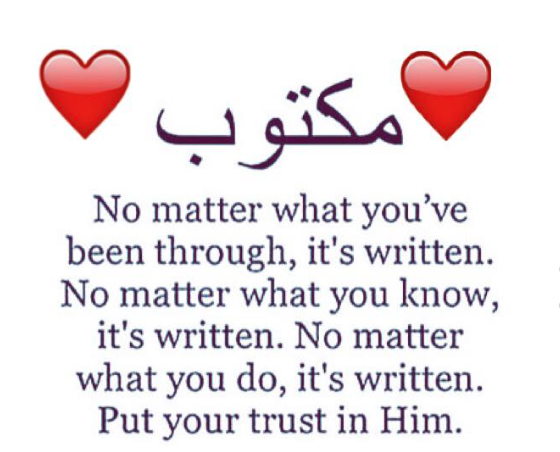 The Virtue of Surah Al-Kahf
PERENNIAL REFLECTION.
Iman ((إِيمَان ʾ))
Comment on this post
V
Vin
07/20/2020 12:48
There is another major point missing. your destiny CAN CHANGE. "“The people of Noah denied and they belied Our Servant and said, ‘He is a madman’ and threatened him. He therefore supplicated (through dua) to his Lord (saying), ‘I am overpowered! Assist me?’ We therefore opened the gates of Heaven, with water flowing furiously. (And) We caused springs to gush out from the earth, so that the two waters met in a quantity that had been destined.” (Qur’an, 54: 9-12)" DUA is powerful and we can cange our destiny only by the assistane of Allah (SWT).
Reply
C
Christofer French
01/09/2020 21:45
In the Movie, "Lawrence of Arabia", do you think the plot treats Lawrenc's point of view that some men "write their own" destiny? Did you appreciate the movie's treatment of this topic?
Reply
C
Carmen Burks
07/10/2020 17:51
Hello, I am learning Islam and Arabic. It is written was a word that I learned the other day and so I looked it up only to come across Maktab. I love this idea or concept. I also think it is interesting what you said about "Lawrence of Arabia". <br /> <br /> I too have written my own destiny. But the question is was it pre-planned?<br /> <br /> interesting?<br /> Carmen
Newsletter
Follow me
Search
THE CRAFT OF WISDOM