Ali was the Son of Abu-Talib, the Uncle of the Prophet. Abu-Talib was a Sheikh of the Banu-Hashim clan of the Quraysh tribe.Moreover, he was the custodian of the Kaaba.

The Prophet said: "`Ali is part of me and I am part of `Ali!

"Among all the companions of the Prophet, Ali was the most knowledgeable. He had thorough knowledge of the Qur’an, and its interpretation. He was the best of all judges, and he was the most eloquent of the Arabs."

"He was one of the early followers of Islam and became a Muslim as a child.His life was dedicated to the Prophet and Islam from the outset"

the name of the legendary sword of Ali which is said to have been given to him by the Prophet. The Prophet gave gave this sword to his cousin Ali in the Battle of Badr.

It was historically frequently depicted as a scissor-like double bladed sword on Muslim flags.

One of the things that made Ali such a badass on the battlefield was his mythical sword Zulfiqar. Zulfiqar was a large scimitar with a two-pronged v-shaped point, and was described as being the Muslim Excalibur.

A famous story of Ali :

That during battle, when he was about to kill an enemy, the man had spit at him. Ali decided to not kill him after this incident. The main reason he cited was that if he had killed him at that moment,his motivation would have been a personal Vendetta and not for God.

Since Prophet Muhammads father Abdullah & his mother had died when he was 6 years old. The prophets grandfather AbdulMuttalib,raised him. However, after the death of his grandfather, the prophet was then raised by Abu-talib, his Uncles. Abu-talib pledged protection for his nephew even during his Islamic preaching era began.

He was the cousin & Son-in-law of Prophet Muhammad. He, the Prophet, was the first person to hold Ali when he was born. Moreover, he also raised him.

The Prophet Married his daughter Fatima to Ali. They had 4 children.Most significant in the Shia is Hassan & Hussain.

Major significant event that stemmed from this is :

The Shias believe that the Prophet chose Ali as his successor and that the leadership should remain in their lineage i.e., the Ahl al- Bayt. The ahl al-bayt includes Ali, Fatima and their Children.

The Sunnis believe that the prophet did not intend this and he had left the idea of the Community to Chose their leader.

Ali was the victor of the battle of Badr.

In the battle of Uhud, most of the Muslims fled from the battlefield. One who did not flee, was Ali. He saved the life of Prophet Muhammad.

Ali was the one who smashed the idols in the Kaaba. He and Prophet , Muhammad, purified the House of God for all time by removing all vestiges of idolatry and polytheism from it.

On the 19th of Ramadan.(27th January) , Ali was attacked by a poison coated sword while prostrating for the fair prayer.He died 2 days later on the 29th January. Like Umar & Uthman, he was assassinated. Despite the major differences between the Sunnis and Shia, both have great respect for him.

​He is a major force in the rise of Islam and is remembered for his loyalty, dedication and wisdom. 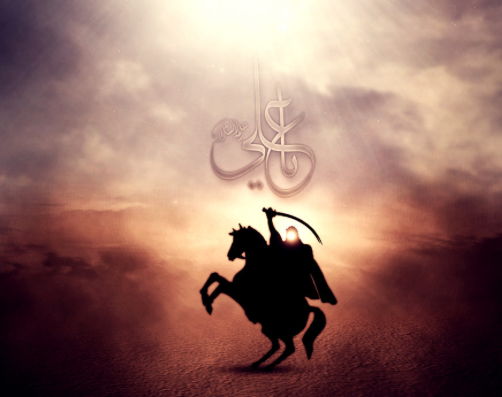